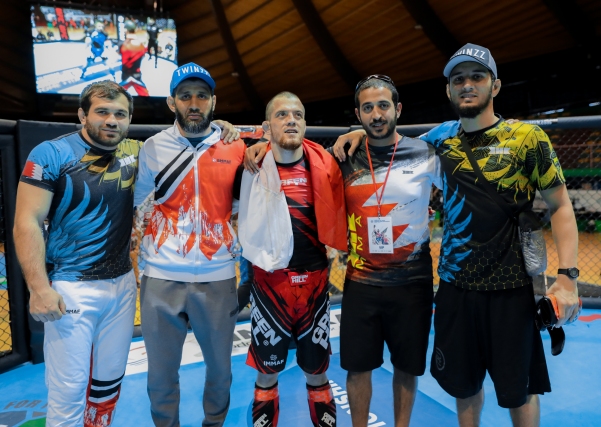 Team Bahrain made history once again. After rising up to the number one spot in the world mixed martial arts rankings, the squad put on a collective performance for the ages, winning five senior golds and one junior gold at the International Mixed Martial Arts Federation-World Mixed Martial Arts Association (IMMAF-WMMAA) European Open.

The IMMAF-WMMAA European Open concluded on June 22, 2019 with Bahrain topping the table for most gold medals, alongside Russia, which had more silver medals. The squad counted on the presence of His Highness Sheikh Khaled bin Hamad Al Khalifa, whose continued efforts made the achievements possible.

At the beginning of last day, the tournament was up for grabs but Bahrain made sure to make a run at the top. The country won all of the five finals that the squad were involved, topped by an incredible first-round knockout by Pasha Kharkhachev, who is the reigning world champion at super heavyweight and new European champion in this weight class.

At heavyweight, Shamil Gaziev was also dominant. He overwhelmed Gadzhimurad Bagaudinov of Russia en route to a second-round technical knockout after ground and pound strikes from mount position.

Bantamweight Magomed Idrisov of Bahrain came out victorious against Alvaro Ucendo of Spain. Featherweight Abdulmanap Magomedov of Bahrain beat Artem Afanasenko of Ukraine to claim the gold medal in their respective weight class.

Finally, Ramazan Gitinov of Bahrain went the distance but overwhelmed Evgeny Morozov of Russia to win the welterweight gold medal by unanimous decision. The historic result means Team Bahrain holds on the hard-earned top spot at the world rankings.

Team Bahrain looks forward to more success at home when the entire world of MMA will meet in November 2019 for the World Championships in Isa Town, Bahrain during the International Combat Week 2019.