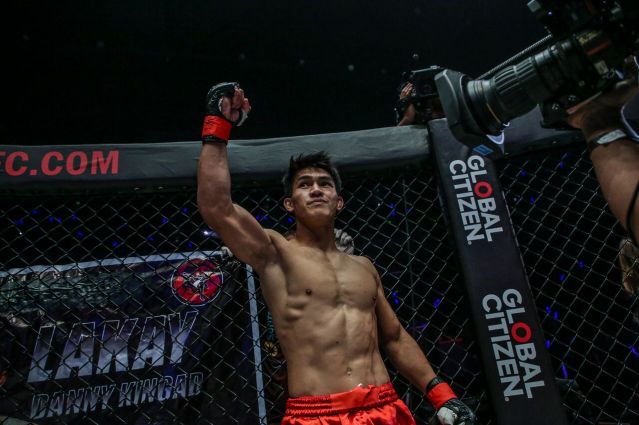 Danny “The King” Kingad, 24, of Baguio City, Philippines is one of the two Filipino mixed martial artists competing at “ONE: Big Bang.” This will be the Igorot MMA fighter’s 13th fight in the Singapore-based martial arts promotion ONE Championship.

Featuring four MMA matches and two kickboxing contests, “ONE: Big Bang” will take place at the Singapore Indoor Stadium in Kallang, Singapore on December 4, 2020. In the third bout of the evening, Kingad will fight Kairat “The Kazakh” Akhmetov, 33, of Taldykorgan, Almaty, Kazakhstan in the flyweight division.

“ONE: Big Bang” will be headlined by Roman Kryklia (Роман Крикля), 29, of Ukraine and Murat “The Butcher” Aygün, 31, of Turkey and the Netherlands. The former is the reigning ONE Light Heavyweight Kickboxing World Champion.

Training out of Team Lakay in La Trinidad, Benguet, Philippines, Kingad currently ranks as the number two contender in ONE Championship’s flyweight division. He is coming out of a unanimous decision victory over “The Hunter” Xie Wei, 24, of China at “ONE: Fire and Fury” at the SM Mall of Asia Arena in Pasay City, Metro Manila, Philippines on January 31, 2020.

This will be Akhtemov’s first fight in 2020. He is coming out of two consecutive unanimous decision victories.

On September 22, 2018, Akhmetov defeated “The Southern Eagle” Ma Haobin, 26, of China at “ONE: Conquest of Heroes” at the Jakarta Convention Center in Jakarta, Indonesia. On March 31, 2019, the Kazakh MMA fighter defeated Reece “Lightning” McLaren, 29, of Australia at “ONE: A New Era” at Ryogoku Kokugikan in Tokyo, Japan.

Kingad will not be Akhmetov’s first opponent from Team Lakay. Also from the same team is former ONE Flyweight World Champion Geje “Gravity” Eustaquio, 31, of Baguio City, who fight the Kazakh MMA fighter twice.

Eustaquio defeated Akhmetov via split decision at “ONE: Total Victory” at the Jakarta Convention Center on September 16, 2017. In their rematch on January 26, 2018 at “ONE: Global Superheroes” at the SM Mall of Asia Arena, the Team Lakay fighter won again via unanimous decision.