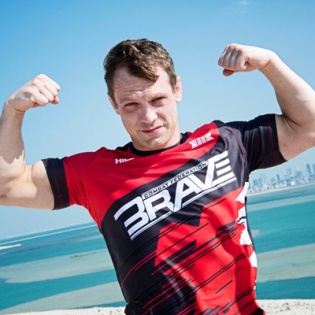 Ian “Enty” Entwistle, 33, of Accrington, England, United Kingdom is set to return from more than four years away with a main event spot at “BRAVE CF 45,” which marks his BRAVE Combat Federation debut. He will take on Dumar “Corazon de Leon” Roa, 30, of Guateque, Boyaca, Colombia on short notice and hopes to make the most of this opportunity handed to him, after Gabriel ‘’Fly’’ Miranda, 30, of Telemaco Borba, Parana, Brazil was forced to pull out.

For Entwistle, the path to victory at “BRAVE CF 45” lies in his unique fighting style that he is sure will take Roa by surprise. The two will clash in a main event catchweight bout of 75kg.

“From what I have watched of Dumar, he is a very good fighter,” Entwistle said of his “BRAVE CF 45” opponent. “It seems he is the best from Colombia. We’ll see when we get in there.”

“BRAVE 45” was originally scheduled for November 12, 2020. As the Kingdom of Bahrain mourned the loss of its prime minister, His Royal Highness Khalifa bin Salman Al Khalifa, BRAVE CF joined in the respects paid to the great leader and postponed the event to November 19, 2020 at the Bahrain National Stadium in East Riffa, Bahrain.