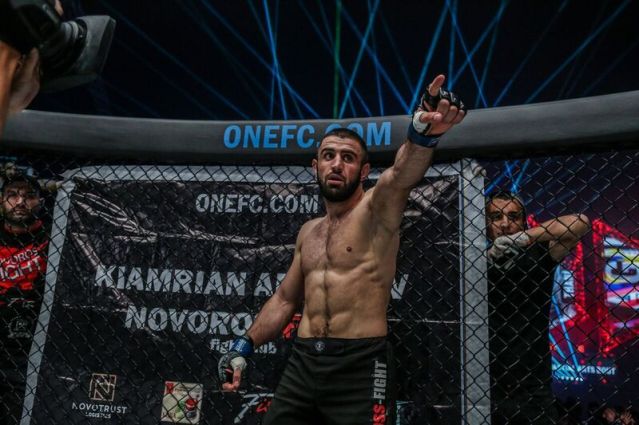 Kiamrian “Brazen” Abbasov, 26, of Bishkek, Kyrgyzstan has been reigning as the welterweight champion of ONE Championship since October 25, 2019. His first title defense will be at “ONE: Inside the Matrix II” at the Singapore Indoor Stadium in Kallang, Singapore on November 6, 2020.

“ONE: Inside the Matrix 2” will feature five mixed martial arts matches. In the main event of the evening, James Nakashima, 32, of Dwight, Illinois, United States will challenge the reigning ONE Welterweight World Champion.

Training out of MMA Lab in Glendale, Maricopa County, Arizona, USA, Nakashima holds a professional MMA record of 12 wins and 0 loss. He joined ONE Championship in 2018.

Born on October 26, 1988, Nakashima was born and raised in Dwight. His father owned a local restaurant while his mother worked as a corrections officer at a maximum security women’s prison.

The MMA Lab product attended the University of Nebraska. He competed as a wrestler but still managed to do well academically.

When Nakashima made his ONE Championship debut at “ONE: Conquest of Champions” at the SM Mall of Asia Arena in Pasay City, Metro Manila, Philippines on November 23, 2018, he defeated Raimond Magomedaliev, 30, of Russia via unanimous decision. In the same venue, Nakashima knocked out Luis “Sapo” Santos, 39, of Brazil at “ONE: Roots of Honor” on April 12, 2019.

“ONE: Inside the Matrix 2” marks Nakashima’s fourth ONE Championship bout. In his most recent fight, which was at the SM Mall of Asia Arena on August 2, 2019, he defeated Yushin “Thunder” Okami, 39, of Japan via unanimous decision.

Like Nakashima, Abbasov has been competing in ONE Championship since 2018. He became the new ONE Welterweight World Champion at “ONE: Dawn of Valor” at the Istora Gelora Bung Karno in Jakarta, Indonesia where he defeated then champion Zebaztian “The Bandit” Kadestam, 30, of Sweden via unanimous decision.

Winning at “ONE: Dawn of Valor” improved the professional MMA record of Abbasov to 22 wins and 4 losses. “ONE: Inside the Matrix 2” marks the Bishkek native’s fifth ONE Championship fight.

Tagged as: James Nakashima, Kiamrian Abbasov, ONE Championship, ONE: Inside the Matrix II