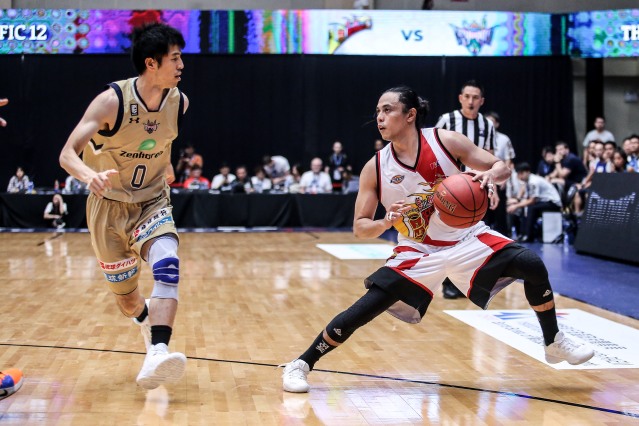 San Miguel Beermen dethroned defending champion Ryukyu Golden Kings of Japan, 101-92, on the evening of September 19, 2019 in the East Asia Super League tournament “Terrific 12” at the Tap Seac-Multi-Sport Pavilion in Macau, China. This gave the Philippine Basketball Association team the semis spot in Group B.

Leading 14-2 early, the Ryukyu Golden Kings had a fine start. But Wells and Romeo joined forces to close the period with a 29-10 run to control the tempo of the game, 31-24.

But the B.League team, behind import De’Mon Brooks, stayed within striking distance as his two free throws cut the San Miguel Beermen’s lead to 70-74 with 9:51 left in the game. Wells again anchored another San Miguel Beermen surge and his one-hand slam gave them a 90-77 lead with 5:03 remaining in the game.

The Ryukyu Golden Kings sliced the lead to single digit on Hayato Kantake’s triple, 86-94. But Wells hit a jumper in the next play to start a crucial 7-3 exchange to put the game out of reach, 101-89, 68 seconds left in the game.

In Group A, SK Knights grabbed the semis spot after beating the Chiba Jets, 86-76. KJ McDaniels exploded for 47 points to lift TNT KaTropa to a 99-90 win over Niigata Albirex of Japan as TNT KaTropa ended their campaign here on a high note.

McDaniels also hauled down 17 rebounds and got solid support from Roger Pogoy and Almond Vosotros. TNT KaTropa finished their Group D campaign with a 1-1 record.

Both teams were already eliminated after losing their matches to Group D semifinalist Liaoning Flying Leopards but still gave out their best to end their respective campaign on a positive note. Nick Perkins led Niigata with 34 points and 12 rebounds while Shinsuke Kashiwagi and Yuichi Ikeda contributed 17 and 16 markers, respectively.