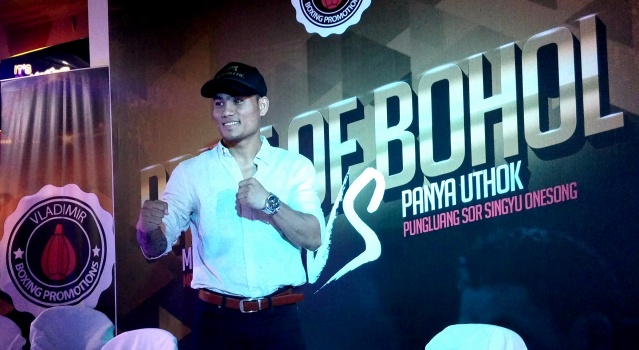 Vladimir Boxing Promotions held “Pride of Bohol,” with seven professional boxing matches, at the Bohol Wisdom School Gymnasium in Tagbilaran. In the main event of the evening, Magsayo competed for the WBC Asia Featherweight Championship belt against Panya Uthok, 29, of Bangkok, Thailand.

Jerrold Tomeldan served as the referee while Damrong Simakajornboon was the supervisor. Oliver Garcia, Nowel Haduca and Arnie Najera were the judges.

After 12 three-minute rounds, the title bout was left in the hands of the judges. Both Garcia and Najera scored it 120-108 while Haduca scored it 118-110 all in favor of the hometown hero.

In the end, Tomeldan raised the hand of Magsayo, who was declared the winner via unanimous decision. Winning at “Pride of Bohol” improved the professional boxing record of the undefeated Filipino boxer to 20 wins and 0 loss.

On the other hand, Uthok now has 53 wins and 7 losses. The Thai boxer has been competing professionally since 2004 and it was his second time to compete in the Philippines.

Magsayo was born in Tacloban City, Leyte, Philippines on June 22, 1995. He is now based in Pasig City, Metro Manila, Philippines.

On May 25, 2013, Magsayo made his professional boxing debut in Lahug, Cebu City, Philippines. He knocked out his countryman Melton Sandal.

Among the three victories of Magsayo, three took place outside the Philippines. On October 17, 2019, he successfully defended his International Boxing Federation Young Featherweight Championship title against Yardley Suarez, 25, of Los Mochis, Sinaloa, Mexico at the StubHub Center in Carson, California, United States.

On September 24, 2016, Magsayo returned to the StubHub Center where he defeated Ramiro “Zurdo” Robles, 26, of Queretaro, Queretaro, Mexico for the World Boxing Organization International Featherweight Championship title. On April 12, 2019, the undefeated Filipino boxer knocked out Ery “Erick Deztroyer” Subiyasno, 33, of Surabaya, Indonesia at The Ring Boxing Communit in Singapore.