“Smokin” Jo Nattawut, 29, was one of the Thai martial artists who attended the official “ONE: Dreams of Gold” open workout on July 25, 2019. It took place at the Golden Tulip Sovereign Hotel in Bangkok, Thailand.

ONE Championship will hold “ONE: Dreams of Gold” at the Impact Arena in Bangkok on August 16, 2019. One of the ONE Super Series bouts on the card is a ONE Featherweight Kickboxing World Grand Prix semi-final bout between Nattawut and Giorgio “The Doctor” Petrosyan, 33, of Italy. 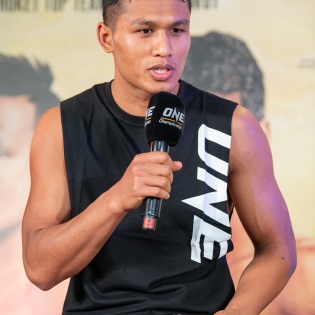 It will be a rematch between Petrosyan and Nattawut. The Thai kickboxer lost to his Armenian-Italian rival during their first ONE Super Series encounter.

“I know my opponent is a legend in this sport and I’ve already lost to him before but I’ve made some key changes to my training and overall style,” Nattawut shated,” “I’m not the same fighter I was a year ago when we first met. I’m stronger and faster now and more well-prepared for our second meeting.”

Here is a clip from the “ONE: Dreams of Gold” open workout at the Golden Tulip Sovereign Hotel:

Ticket information for ONE: DREAMS OF GOLD is available at www.onefc.com.