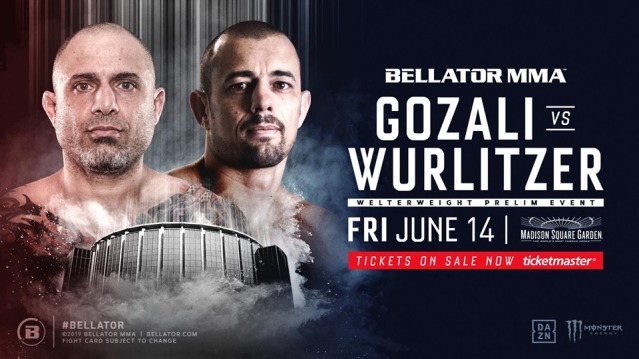 Israel and Brazil were among the seven countries represented at “Bellator 222.” Bellator MMA held the mixed martial arts even in Madison Square Garden in New York City, New York, United States on June 14, 2019.

Gozali solely represented Israel at “Bellator 222” while Wurlitzer was one of the four representatives of Brazil. Canada, Hungary, Japan, Peru and the U.S. were also represented.

Born in Brazil on March 25, 1983, Wurlitzer went to Colégio da Polícia Militar do Paraná in Curitiba. As an MMA fighter, he has been competing professionally since 2002.

Wurlitzer made his Bellator MMA debut at “Bellator 222.” He previously competed at Circuito Talent MMA, Imortal Fight Championship and Adventure Fighters Tournament, among others.

Gozali was born in Bat Yam on May 6, 1973. Training out of Renzo Gracie Israel in Bat Yam, he is a black belt in karate and ninjutsu and a 4th degree black belt in Brazilian Jiu Jitsu.

“Bellator 222” marked Gozali’s sixth Bellator MMA fight. He has been competing professionally since 1998.

Gozali and Wurlitzer competed at a catch weight of 128 lbs. Dan Miragliotta served as the referee.

Winning at “Bellator MMA” improved Gozali’s professional MMA record to 11 wins and 6 losses. On the other hand, Wurlitzer now has 22 wins, 23 loses, 0 draw and 1 No Contest.

Lyoto “The Dragon” Machida, 41, of Brazil and Chael Sonnen, 42, of West Linn, Oregon, USA competed in the light heavyweight division in the co-main event. The Brazilian contender knocked out his American opponent in the second round.

Check all the “Bellator 222” results on Conan Daily.