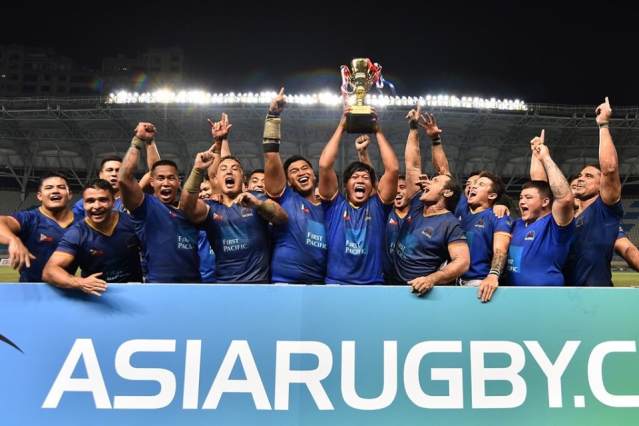 The Philippine Volcanoes successfully defeated its Singaporean counterpart in a thrilling final 29-21 to remain the Asia Rugby Division 1 Champion. After successfully toppling the number 1 seed the Sri Lanka Tuskers 39-22 on March 29, 2019, the Philippine national rugby union team had set themselves for the a task for a 2018 rematch with Singapore.

On June 1, 2019, the Asia Rugby Division 1 Championship took place at the Taipei Municipality Stadium in Taipei, Taiwan. It was the same venue for the semi-finals where Singapore defeated the host nation.

A perfectly weighted cross field kick for Justin Villazor Coveney for the opening 5 points set up by the Volcanoes team captain Danny Bembo Matthews allowed their team to start the match strongly. Not long after, the Philippine team had back to back points after Ellis Padillo Rudder found open space to dive over for another 5 pointer.

Singapore hit back after a sneaky quick tap scoring a full length of the field try to close the score lines from 12 to 7. The Volcanoes extended the lead after Patrice Ortiz Olivier broke through the defense adding another 5 points to the Philippine tally.

What kept Singapore in the match was a string of penalties, successfully converting three penalty goals, until Ned Plarizan Stephenson extended the Volcanoes lead down the left sideline that provided the extra buffer. The Philippine forward pack remained dominant for most the match and continued to pay off after a short offload from Robert Luceno Fogerty provided Eric Cruz Erickson an additional five extra points.

At 29 to 16, Singapore hit back and provided hope scoring a late try to close the gap. However, after an unsuccessful conversion kept the Volcanoes ahead by 8 points with little time left on the clock, which ensured the Philippines the championship title defeating Chinese Taipei, Sri Lanka and Singapore in the Asia Rugby Division 1 Championship.

“It wasn’t the prettiest game but we showed a lot of heart to get the win,” Matthews. “All credit Singapore. They were excellent. I can’t say enough how good they were.”

“Having two back-to-back games like this in quick succession was a big test and we showed immense determination to get over the line,” Matthews continued. “It’s an important win for us.”

Kingsley Ballesteros of the Clark Jets made his international debut for the Volcanoes in the Asia Rugby Division 1 Championship 2019. Matthews said that their role as a team is “to help with the development of rugby in the Philippines” and to see the likes of Ballesteros “come off the bench is a testament to growth and development game” and it is good to see the experience for the debutante who has come through the ranks.

The Asia Rugby Division 1 Championship 2019 marked the first time the Volcanoes has tasted this success since 2012 in this division, a special achievement for the team, especially since there had been a change of format for the competition in the past. Philippine Rugby general manager Jake Letts said, “It’s been really positive over the last two years especially, we have been building this program each year.”

“To get this success is a great achievement,” Letts continued. “Credit to all the players and coaching and management staff, a tremendous job they deserve this result. A big thanks to our headline partners in First Pacific, MVP Sports Foundation and the PSC for their continued support.”

Here is a clip from the Philippine Volcanoes: