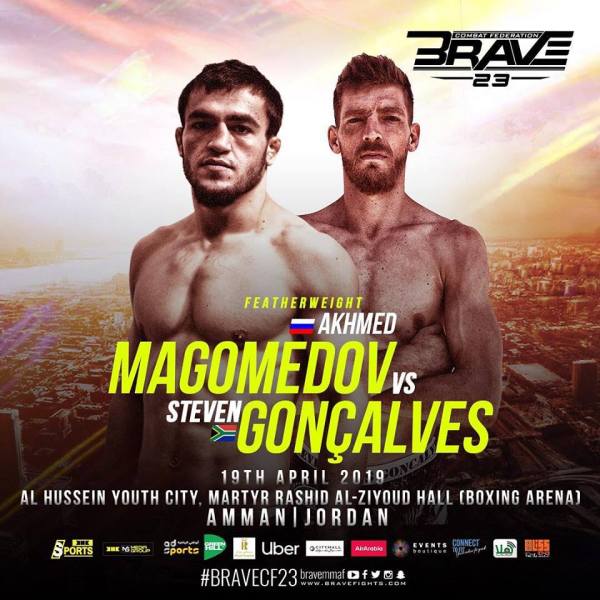 Russia and South Africa were among the 16 countries represented at “Brave 23: Pride and Honor” on April 19, 2019. It was the second Brave Combat Federation event to take place in the country.

Gonçalves started competing as an amateur MMA fighter in 2014. He made his successful professional MMA debut in 2016.

Magomedov made his successful professional MMA debut in 2017. He earned his first two wins in one event.

Magomedov and Gonçalves competed in the featherweight division.

In the first round, Magomedov got an early takedown. In a heavy ground and pound in the second round, he oped a cut on Gonçalves.

After three five-minute rounds, the featherweight contest was left in the hands of the judges. In the end, the referee raised the hand of Magomedov, who was declared the winner via unanimous decision.

All of the three judges scored the bout 30-27 in favor of Magomedov. This allowed the Russian fighter to maintain his unblemished record.

Winning at “Brave 23: Pride and Honor” improved Magomedov’s professional MMA record to 6 wins and 0 loss. On the other hand, Gonçalves now has 6 wins and 2 losses.

Mounir “The Sniper” Lazzez, 31, of Tunisia and Eldar “Khan” Eldarov, 27, of Bahrain competed for the inaugural Brave CF Super Lightweight Championship title in the second co-main event. [RESULT TO BE ADDED HERE]

Check all the official results on Conan Daily.