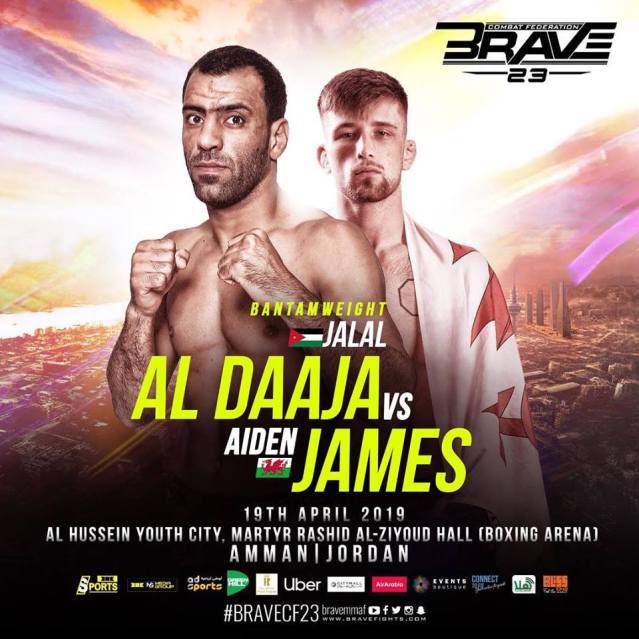 Jordan and Wales were among the 16 countries represented at “Brave 23: Pride and Honor” on April 19, 2019. It was the second Brave Combat Federation event to take place in the country.

Featuring 12 mixed martial arts matches, which include three title bouts, “Brave 23: Pride and Honor” took place at the Martyr Rashid Al-Ziyoud Hall Boxing Arena in Amman, Jordan. The sixth bout of the evening was between was between Jalal Al Daaja, 31, of Amman, Jordan and Aidan James, 23, of Merthyl Tydfil, Wales.

An International Mixed Martial Arts Federation alum, James made his successful professional MMA debut in 2017. He joined Brave CF in 2018.

Al Daaja has been competing professionally since 2014. He earned his first professional MMA win in 2015 and joined Brave CF in 2017.

Al Daaja and James competed in the bantamweight division. It was the last bout on the preliminary card.

The referee put a stop to the bantamweight contest in the third round. James knocked out Al Daaja with a counter hook.

Winning at “Brave 23: Pride and Honor” improved James’s professional MMA record to 4 wins and 0 loss. On the other hand, Al Daaja now has 6 wins and 4 losses.

Mounir “The Sniper” Lazzez, 31, of Tunisia and Eldar “Khan” Eldarov, 27, of Bahrain competed for the inaugural Brave CF Super Lightweight Championship title in the second co-main event. [RESULT TO BE ADDED HERE]

Check all the official results on Conan Daily.