Cian Cowley: I had my eye on John Brewin since ‘Brave 13: European Evolution’ in Belfast, Northern Ireland 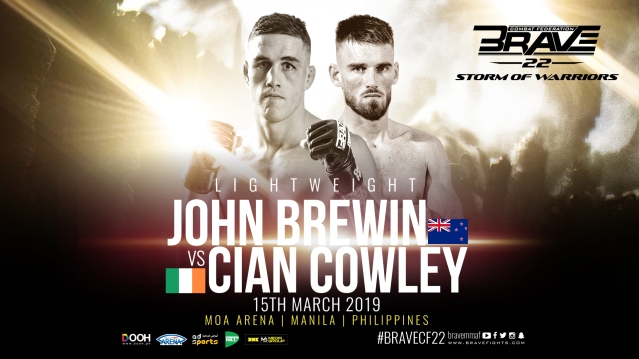 Training out of Straight Blast Gym Ireland in Dublin, Ireland, Cian “The Warrior” Cowley, 25, made his Brave Combat Federation debut on June 9, 2018 at “Brave 13: European Evolution” at the SSE Arena in Belfast, Northern Ireland where he knocked out Daniel “Obi Wan” Olejniczak, 31, of Belfast. Since then, the mixed martial artist from Dublin had his eye on John Brewin, 24, of Auckland, New Zealand.

On March 15, 2019, Cowley and Brewin will compete at “Brave 22: Storm of Warriors” at the SM Mall of Asia Arena in Pasay City, Metro Manila, Philippines. It marks the Irish contender’s third bout in Brave CF and the New Zealander’s fourth outing in the Bahrain-based MMA promotion.

“Brewin is a good fighter,” Cowley stated. “I respect him a lot. I’ve seen him fight live twice and he’s got a great mindset; I can tell that about him.”

“I’m good at reading people but it’s a great fight for me,” Cowley continued. “I had my eye on him since my first fight in Belfast. I knew I was going to end up fighting him down the road. I didn’t know it was going to be this soon but here we are.”

Brewin and Cowley are the sole representatives of New Zealand and Ireland, respectively, at “Brave 22: Storm of Warriors.” In the seventh bout of the evening, they will battle it out in the lightweight division.

“This is a great time for me,” Cowley said. “I’m coming off two finishes. He has great finishes in his career as well so it’s going to be a good clash.”

If Cowley becomes successful at “Brave 22: Storm of Warriors,” he wants to challenge reigning Brave CF Lightweight Champion Abdul-Kareem “Pride of Palestine” Al-Selwady, 23, of Amman, Jordan. The latter is set to defend his title against Luan “Miau” Santiago, 24, of Brazil at “Brave 23” in Amman on April 19, 2019.

“He’s the reigning champion at the moment so he’s on top of my hit list,” Cowley said of Al-Selwady. “It’s just the way it goes.”