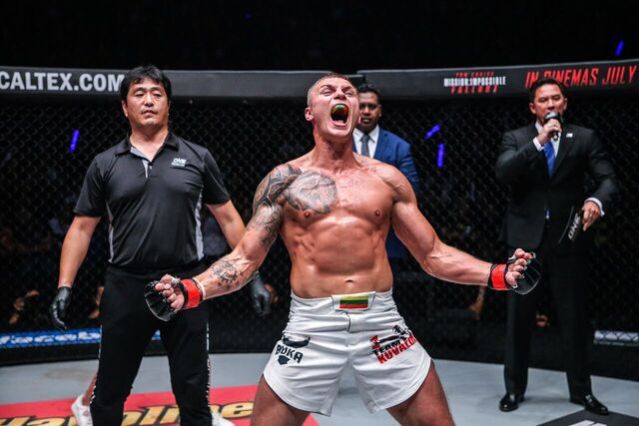 Training out of Sparta Gym in Vilnius, Lithuania, Sergej “Kuvalda” Maslobojev, 31, of Lithuania won two victories in ONE Super Series. He has nothing but praises for the ONE Championship’s striking-only league.

When I asked Maslobojev what makes ONE Championship different from other promotions, he noted that the Singapore-based martial arts promotion has a “really professional team.” He told me, “From promoting to organizing the events, everything is scheduled and on time.”

“They have many fans and followers,” Maslobojev said of ONE Championship athletes. “ONE Championship is my one of favorite organizations for sure. I really want to become their champion!”

Maslobojev was born in Klaipėda, Lithuania on May 22, 1987. He was 18 years old when he started his kickboxing training.

On April 12, 2018, Maslobojev made his successful ONE Super Series debut at “ONE: Grit and Glory” at the Jakarta Convention Center in Jakarta, Indonesia. He defeated Antonio Plazibat, 25, of Croatia via unanimous decision in a kickboxing bout at a catch weight of 95 kg.

On July 13, 2018, Maslobojev competed in ONE Super Series for the second time. He defeated Florent Kaouachi, 30, of France via unanimous decision in a kickboxing bout in the middleweight division at “ONE: Pursuit of Power” at the Axiata Arena in Kuala Lumpur, Malaysia.

“And I like boxing gloves more,” Maslobojev added. “You can play more, make good defense and more combinations (with boxing gloves).”

In Maslobojev’s last MMA fight, which was at “Verdict Fighting Championship 1” at the Arbat Cultural and Entertainment Center in Moscow, Russia on February 11, 2012, he knocked out Alexei Gureev, 34, of Moscow. In the Lithuanian martial artist’s last boxing bout, which was in Liepaja, Latvia on November 22, 2013, he knocked out Tambwe “Big Joe” Djeko, 29, of Brussels, Belgium.

Watch the ONE Super Series bout between Maslobojev and Plazibat in Kuala Lumpur here: