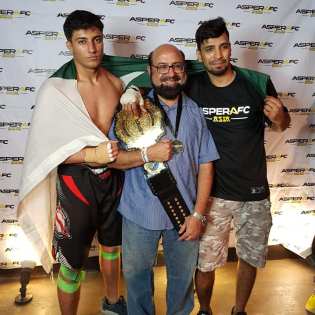 On January 12, 2019, Usmani made his professional MMA debut successfully at “Aspera FC Asia 2,” which took place took place at the Sagul Malingap Foodpark in Diliman, Quezon City, Metro Manila, Philippines. He submitted Aldredo Melendres of the Philippines via armbar after 1 minute and 20 seconds in the first round.

Usmani and Melendes competed in the lightweight division. They both made their debuts in Aspera Fighting Championship Asia, a branch of Aspera FC Brazil.

Including Usmani, two athletes represented Pakistan at “Aspera FC Asia 2.” The other one was Faizan “The Hunter” Fayaz, who captured the Aspera FC Asia Lightweight Championship title via a unanimous decision victory over his Filipino opponent Lyndon Castillo.

While Usmani now holds a professional MMA record of 1 win and 0 loss, Khan has 8 wins, 4 losses and 1 No Contest as an amateur MMA fighter. In 2018, Khan won 6 out of 7 amateur bouts.

On November 27, 2018, Khan made his successful debut in Bahrain-based MMA promotion Brave Combat Federation. He knocked out his fellow Pakistani fighter Sikandar Badar in the first round at “Brave 17” at the Nishtar Park Sports Complex in Lahore, Pakistan.

“Brave 17” marked Brave CF’s debut in Pakistan. It was also the first ever global MMA event to take place in the country.

Currently, Khan is based in Bahrain. Watch his Brave CF bout against Badar here: