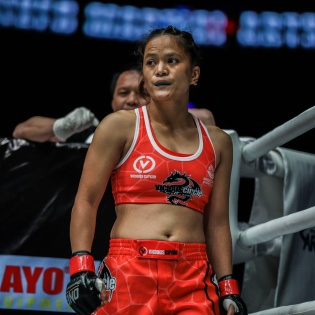 The Philippines has yet to have a female world champion in mixed martial arts. Training out of Team Lakay in Baguio City, Philippines, Gina “Conviction” Iniong, 29, aims to be the first one but for this to happen, she has to dethrone reigning as ONE Women’s Atomweight World Champion is Angela “Unstoppable” Lee, 22, of Singapore.

“I am still hoping to get a shot at the ONE Women’s Atomweight World Title and fight Angela Lee,” Iniong admitted. “One of my dreams is to challenge her because I want to become a world champion.”

In 2017, Iniong was on her way to the title shot when she had her first ONE Championship loss. In a rematch, she lost to Mei “V.V.” Yamaguchi, 36, of Tokyo, Japan via unanimous decision at “ONE: Immortal Pursuit” at the Singapore Indoor Stadium in Kallang, Singapore on November 24, 2017.

On April 20, 2018, Iniong bounced back by defeating Jenny “Lady GoGo” Huang, 28, of Taipei, Taiwan via unanimous decision at “ONE: Heroes of Honor” at the SM Mall of Asia Arena in Pasay City, Metro Manila, Philippines. But on July 7, 2017, the Team Lakay fighter lost via unanimous decision to Istela Nunes, 26, of Parana, Brazil at “ONE: Battle for the Heavens” at the Guangzhou Tianhe Gymnasium in Guangzhou, Guangdong, China.

For Iniong to earn her way back to the title shot, she has to go back to winning ways. Her first step is to defeat Jihin “Shadow Cat” Radzuan, 20, of Johor Bahru, Malaysia at “ONE: Clash of Legends” at the Impact Arena in Bangkok, Thailand on February 16, 2019.

“My last fight made me realize that I have so many techniques to improve and develop,” Iniong said. “I am coming with everything to have my hand raised in Bangkok.”

Iniong has been working diligently at Team Lakay in an effort to fine-tune her skills and enter the match-up at the top of her game. She said, “I am working doubly hard in training by pushing myself to the limits.”

Meanwhile, Lee is set to challenge reigning ONE Women’s Strawweight World Champion “The Panda” Xiong Jing Nan, 31, of China at “ONE: A New Era” at the Ryogoku Kokugikan in Tokyo, Japan on March 31, 2019. It will be the first ever ONE Championship event to be held in Japan.

Like Lee, Radzuan is an undefeated fighter. The reigning ONE Women’s Atomweight World Champion currently has 9 wins while the Malaysian fighter has 4 wins.

On the other hand, Iniong has 7 wins and 4 losses. Here is one of her previous ONE Championship bouts: