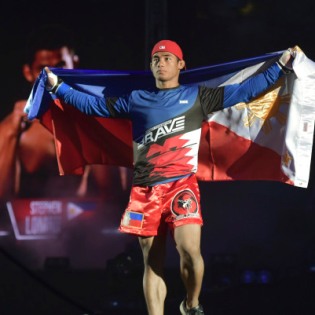 Brave Combat Federation has not been shy about its plans for world domination. Since its inception in 2016, the biggest mixed martial arts promotion in the Middle East has traveled extensively, visiting 14 countries throughout 21 events and at the forefront of this revolution are some of the Philippines’ finest athletes.

As Brave CF prepares for its Filipino debut, set for the SM Mall of Asia Arena in Pasay City, Metro Manila, Philippines on March 15, 2019 with “Brave 22: Storm of Warriors,” local stars are gearing up for homecoming. Reigning Brave CF Bantamweight Champion Stephen “The Sniper” Loman, 27, of the Philippines is confirmed in the main event as he looks for an unprecedented third defense of his belt against former Brave CF Featherweight Champion Elias “Smile” Boudegzdame, 25, of France.

Loman has been a proud representative of the Philippines on the international stage. He fought in Bahrain and Northern Ireland, proving his worth to different audiences and earning fans in those two countries, who are known for their love of martial arts.

Another Filipino rising star has gone above and beyond to represent the Philippines flag in the global stage. Brave CF bantamweight contender Jeremy “The Juggernaut” Pacatiw, 22, is the record-holder for most appearances in the Bahrain-based  MMA promotion with seven fights.

Pacatiw has become a world-citizen in the process, flying the Filipino flag as he went to enemy territory in Brazil to face local fighter Thiago Dela Coleta, 22, and coming out with a big knockout win. The Filipino fighter has also been present in some of Brave CF’s landmark events, such as “Brave 14” in Tangier, Morocco, which was the first-ever global MMA show to take place in Africa.

At “Brave 14,” Pacatiw took care of Keith “Killa” Lee, 21, of the United States, brother of UFC lightweight contender Kevin “The Motown Phenom” Lee, 25. The Filipino fighter earned a dominant decision win and setting himself up for another big fight and another huge win in Pakistan for “Brave 17,” he beat hometown idol Uloomi “Kratos” Shaheen, 27, in a Fight of the Year contender.

Both Loman and Pacatiw are training out of Team Lakay in Baguio City, Philippines under the tutelage of Mark Sangiao. The two Brave CF stars have given back to their communities with several visits and seminars in self-defense to Filipino schools in Baguio City.

Other Filipino Brave CF stars such as Arben “Big Bang” Escayo, 31, and Ariel “The Lady Boxer” Oliveros, 23, were also in action at “Brave 17,” proving the deep connection between Brave’s rise to the top and the Philippines rise to prominence in the international MMA scenario. Vaughn “The Spawn” Donayre, 38, and Team Lakay fighters Crisanto “The Slugger” Pitpitunge, 31, and Jon Chris “Happy Feet” Corton, 26, represented the Philippines at “Brave 16” in Abu Dhabi, United Arab Emirates.

The Philippines has become a hotbed for MMA in Asia and Brave CF has counted on Filipino athletes to help its rise to the top of combat sports. Loman’s career in the sport can be mirrored by the rise of the sport in his home country and his rise to the top has even made Alfonso Ver, the Philippines’ Ambassador in Bahrain, ask specifically for a Brave CF in his country.