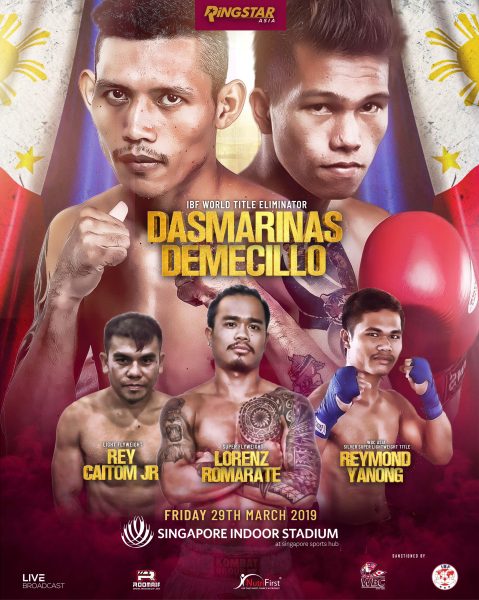 “The world is starting to know that Michael ‘Gloves on Fire’ Dasmarinas does have a lot of power and a good chin,” Farrell stated. “As a fighter, Michael has shown that he is vulnerable against a busy fighter but that’s the only real hard criticism I have about him.”

“In the past, he hasn’t been recognized or celebrated as much as the other world champions from the Philippines, and often overlooked,” Farrell continued. “But now, that he is with Ringstar, this is changing rapidly, and Michael and his fights are receiving global interest.”

“I truly believe Michael has the talent to go all the way,” the Ringstar Boxing CEO added. “But he needs to focus more on his craft and improve another 1000 percent if he is truly going to be a world-renowned great fighter.”

Holding a professional boxing record of 28 wins, 2 losses and 1 draw, Dasmarinas will co-headline “Ridhwan Ambunda II-The Rematch” on March 29, 2019 at the Singapore Indoor Stadium in Kallang, Singapore. He and Kenny “Big Heart” Demecillo, 26, of Cebu City, Cebu, Philippines, who has 14 wins, 4 losses and 2 draws, will compete for an International Boxing Federation world title eliminator fight.

Speaking about the upcoming bout between Dasmarinas and Demecillo in Singapore, Farrell said the first word that springs to mind is tough. The Ringstar Boxing CEO said, “This fight for the IBF number one spot and a chance to face the IBF world champion is going to be one very tough fight for both Michael and Kenny.”

“Michael will need to hurt Kenny early in my opinion or it could be a very painful night for the ‘Gloves on Fire’ power puncher,” Farrell shared. “However, Michael is in this position for a reason. He needs to prove to everyone that he belongs in the top world rankings and that he deserves a shot at the title.”

“As for Kenny, from what I have researched, he is absolutely brave, relentless, and can take plenty of hard shots,” Farrell said of Dasmarinas’s opponent. “He has some great combinations, and if he sticks to his game plan and doesn’t get caught, he could end up winning the fight.”