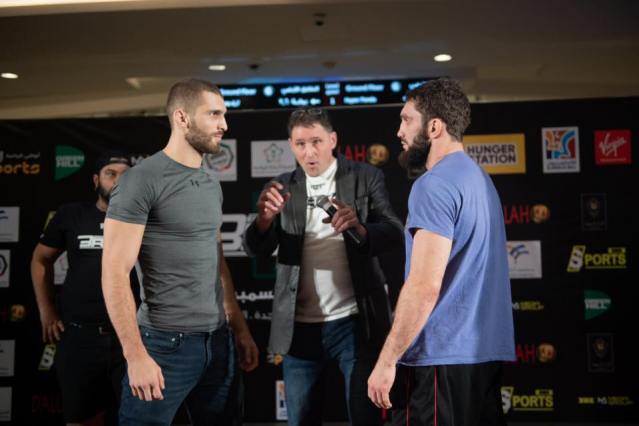 Russia and Lebanon were among the 11 countries represented at the Brave Combat Federation event “Brave 21: Saudi Arabia” held on December 28, 2018 at the King Abdullah Sports City Indoor Sports Hall in Jeddah, Saudi Arabia. It is the final event of the Bahrain-based mixed martial arts promotion in 2018.

Featuring 10 MMA bouts, “Brave 21: Saudi Arabia” is the first Brave CF event to be held in Saudi Arabia. In the co-main event of the evening, Gadzhimusa “Deadshot” Gadzhiev of Makhachkala, Dagestan, Russia faced Rami “The Russian” Hamed of Beirut, Lebanon.

“Brave 21: Saudi Arabia” marked Hamed’s Brave CF debut. He was the only fighter who represented Lebanon in the event.

Born in Russia on June 29, 1992, Gadzhiev has been competing professionally since 2013. He previously competed in Eurasian Pankration League and Absolute Championship Berkut, among others.

Gadzhiev and Hamed battled it out in the welterweight division. The referee put a stop to the contest in the first round when the Lebanese fighter knocked out his Dagestani opponent.

Winning at “Brave 21: Saudi Arabia” improved Hamed’s professional MMA record to 7 wins, 2 losses and 1 No Contest. On the other hand, Gadzhiev now has 9 wins and 5 losses.

In the main event, Marat Magomedov of Makhachkala, Dagestan, Russia and Jeremy “JBC” Kennedy of Surrey, British Columbia, Canada battled it out in the featherweight division. The Canadian contender knocked out his Dagestani opponent in the third round.