Malaysia vs Japan: Muhammad Aiman, Shuya Kamikubo to fight at ‘ONE: Heart of the Lion’ in Singapore 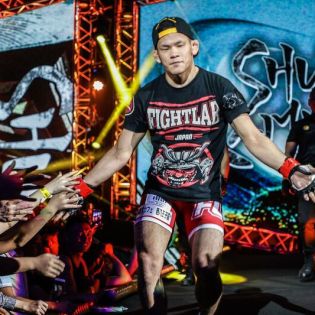 Malaysia and Japan will be represented at “ONE: Heart of a Lion,” a ONE Championship event taking place at the Singapore Indoor Stadium in Kallang, Singapore on November 9, 2018. In the third bout of the evening, “Jungle Cat” Muhammad Aiman, 23, of Kuala Lumpur, Malaysia will face Shuya “Stealth” Kamikubo, 24, of Yokohama, Kanagawa, Japan.

Based out of Bali, Indonesia, Aiman has impressed in his time inside the ONE Championship cage thus far, defeating Hisyam Samsudin by unanimous decision in his first match in the promotion before stopping Brazilian grappler Eduardo Novaes in his second outing. In the Malaysian mixed martial artist’s most recent contest, he thoroughly dominated Chen Lei to win by submission in the second round.

Aiman is a former MIMMA Featherweight Champion while Kamikubo is the DEEP Future King 2014 Tournament Champion. A former collegiate judoka, the Japanese contender dedicated himself to his judo training during his studies at Nihon University and achieved several top finishes in major tournaments.

Now owning a professional MMA record of 8 wins, 1 loss and 1 draw, Kamikubo was inspired to compete in MMA by the success of fellow judoka and Japanese martial arts legend Shinya “Tobikan Judan” Aoki. Before joining ONE Championship, the former competed mostly in Japanese regional promotions such as Pancrase and Tribe Tokyo Fight.

In the co-main event of “ONE: Heart of the Lion,” Christian “The Warrior” Lee, 30, of Singapore and Kazuki Tokudome, 31, of Tokyo, Japan will compete in an MMA match in a catch weight of 73 kg. In the main event, reigning ONE Bantamweight World Champion Bibiano “The Flash” Fernandes, 38, of Manaus, Amazonas, Brazil will defend his title against ONE Interim Bantamweight World Champion Kevin “The Silencer” Belingon, 30, of Kiangan, Ifugao, Philippines.

The bantamweight title unification bout will be a rematch between Fernandes and Belingon. Here is the full “ONE: Heart of the Lion” fight card:

Ticket information for ONE: HEART OF THE LION is available at www.onefc.com.

Tagged as: Muhammad Aiman, ONE Championship, ONE: Heart of the Lion, Shuya Kamikubo