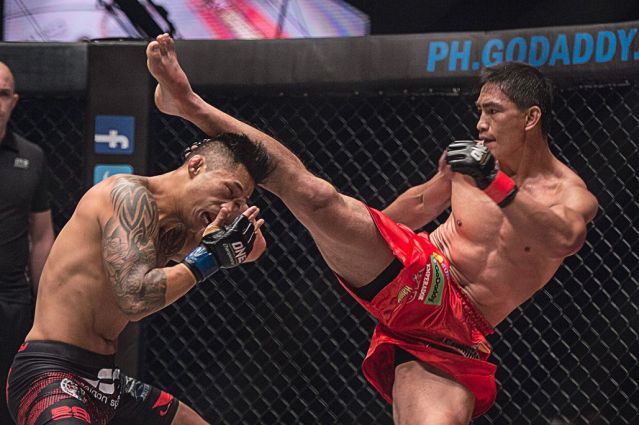 It appears that a rematch between Martin “The Situ-Asian” Nguyen, 29, of Australia and Vietnam and Eduard “The Landslide” Folayang, 34, of the Philippines is happening the soon. The former has yet to defend his ONE Lightweight World Champion belt and ONE Championship fans are eager to know who he fights next in the lightweight division.

Aside from Folayang, the top contenders in ONE Championship’s lightweight division are Shinya “Tobikan Judan” Aoki, 35, of Japan, Ev  “E.T.” Ting, 29, of New Zealand and Malaysia, Timofey Nastyukhin, 28, of Russia, Honorio “The Rock” Banario, 28, of the Philippines and Amir Khan, 23, of Singapore. On September 8, 2018, Banario and Khan will compete in the co-main event of “ONE: Beyond the Horizon” at the Baoshan Arena in Shanghai, China.

“I would say Shinya Aoki,” Nguyen said when asked who he thought should be his first challenger in the lightweight division. “He is a legend, and he has taken out his last two opponents devastatingly with first-round finishes.”

Aoki’s last two contests have lasted a combined five minutes and thirty-one seconds. He submitted Rasul Yakhyaev, 27, of Russia in just over three minutes in Singapore before finishing off Shannon “OneShin” Wiratchai, 29, of Thailand in just over two minutes in the Philippines.

“As far as Timofey Nastyukhin goes, he is not as busy as I would expect for someone who wants to get a title shot,” Nguyen added. “And Amir Khan is fighting Honorio Banario in Shanghai, so we will see if he jumps ahead if he wins.”

Here is a brief interview with Nguyen before his bout with Folayang: